May 10, 2018
Update, June 2019: Upon evaluation, Freedom of the Press Foundation has decided to discontinue its work on the Sunder project. We have archived the GitHub repository, and we encourage anyone interested in making secret sharing user-friendly to examine it. For actively maintained implementations of Shamir's Secret Sharing, we recommend that you consider using Mozilla SOPS or Hashicorp Vault.

The moment a news organization is given access to highly sensitive materials—such as the Panama Papers, the NSA disclosures or the Drone Papers—the journalist and their source may be targeted by state and non-state actors, with the goal of preventing disclosures. How can whistleblowers and news organizations prepare for the worst?

The Freedom of the Press Foundation is requesting public comments and testing of a new open source tool that may help with this and similar use cases: Sunder, a desktop application for dividing access to secret information between multiple participants.

Sunder is not yet ready for high stakes use cases. It has not been audited and is alpha-quality software. We are looking for early community feedback, especially from media organizations, activists, and nonprofits.

While Sunder is a new tool that aims to make secret-sharing easy to use, the underlying cryptographic algorithm is far from novel: Shamir's Secret Sharing was developed in 1979 and has since found many applications in security tools. It divides a secret into parts, where some or all parts are needed to reconstruct the secret. This enables the conditional delegation of access to sensitive information. The secret could be social media account credentials, or the passphrase to an encrypted thumb drive, or the private key used to log into a server.

Sunder is currently available for Mac and Linux, and in source code form. See the documentation for installation and usage instructions. We also invite you to complete a short survey which will influence the future direction of this tool.

If you are interested in getting involved in development, we welcome your contributions! Please especially take a look at issues marked "easy" or "docs". Sunder is based on the open source RustySecrets library, which is also open to new contributors. 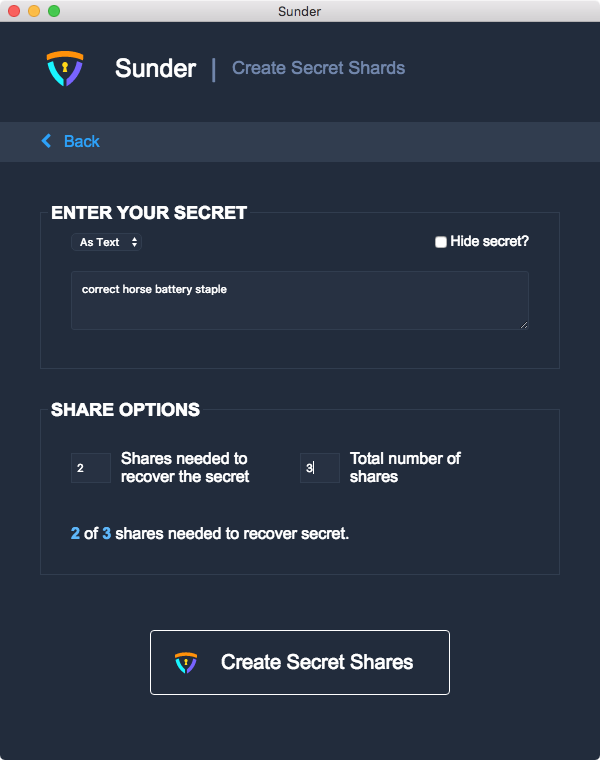 Sunder allows you to divide a secret into shares, a certain number of which are required to reconstruct it

How could Sunder be useful for journalists, activists and whistleblowers?

Until a quorum of participants agrees to combine their shares (the number is configurable, e.g., 5 out of 8), the individual parts are not sufficient to gain access, even by brute force methods. This property makes it possible to use Sunder in cases where you want to disclose a secret only if certain conditions are met.

The most frequently cited example is disclosure upon an adverse event. Let's say an activist's work is threatened by powerful interests. She provides access to an encrypted hard drive that contains her research to multiple news organizations. Each receives a share of the passphrase, under the condition that they only combine the shares upon her arrest or death, and that they take precautions to protect the shares until then.

Secret sharing can also used to protect the confidentiality of materials over a long running project. An example would be a documentary film project accumulating terabytes of footage that have to be stored safely. By "sundering" the key to an encrypted drive containing archival footage, the filmmaking team could reduce the risk of accidental or deliberate disclosure.

But most importantly, we want to hear what you think. Please give Sunder a spin by downloading one of the releases and following the documentation, and please take our survey!

As noted above, Sunder is still alpha quality software. It's very possible that this version has bugs and security issues, and we do not recommend it for high stakes use cases. Indeed, Sunder and the underlying library have not received a third party audit yet.

Furthermore, any secret sharing implementation is only as robust as the operational security around it. If you distribute or store shares in a manner that can be monitored by an adversary (e.g., online without the use of end-to-end encryption) this could compromise your security.

Today the Tow Center for Digital Journalism at Columbia Journalism School has published a first-of-its-kind study on how newsrooms are using SecureDrop, our open-source whistleblower submission system that is now …

In July, we announced the release of SecureDrop 0.3.4 and published the accompanying security audit by iSEC partners (now NCC Group). The audit found 10 issues, one of which …

In the past few days there have been a flurry of stories about the Russian plane that crashed in the Sinai peninsula, which investigators reportedly think may have been caused …