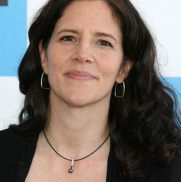 Laura Poitras is a filmmaker and journalist. Her film CITIZENFOUR, the third installment of her post-9/11 Trilogy, won an Academy Award for Best Documentary, along with awards from the British Academy of Film, Independent Spirit Awards, Director’s Guild of America, and Emmy Awards.

Her reporting on NSA mass surveillance shared in the 2014 Pulitzer Prize Public Service. She has been on a U.S. government secret watch list since 2006.  In 2015, the Electronic Frontier Foundation filed a FOIA lawsuit against the U.S. government to obtain her FBI files.

In 2016, she had her first solo museum exhibition at the Whitney Museum. Laura is the recipient of a 2012 MacArthur Fellowship, and is the co-creator and executive producer of Field of Vision.